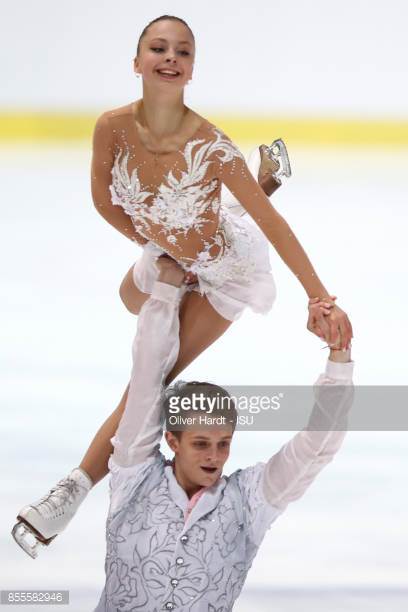 The pairs event at Russian Nationals is always so fun to watch. It’s actually one of my favorite pairs competitions of the entire year! The quality level and depth of Russian pairs, as a group, is just so high that it’s inspiring and exciting to watch. This year, there was another level of intensity, with Olympic spots on the line. The Olympic pressure seemed to negatively affect the top teams in the competition, all of whom had mistakes in the long program. However, the younger teams in the competition really shone, with many terrific performances. Unfortunately I don’t have time to do a full review of this event—with holiday preparations here in the U.S.–but here are some brief notes/reactions to Russian Nationals.

Tarasova/Morozov won the event, reconfirming their status as Russia #1, after placing behind Stolbova/Klimov in the Grand Prix Final. It wasn’t a great event for Tarasova/Morozov; Evgenia made a couple mistakes on their SBS jumps. But the rest of their technical elements in both programs were pretty high-quality, and they did enough to win. In both programs, their speed and power were impressive. And their long program was their best since Rostelecom Cup. A step in the right direction for Tarasova/Morozov, but they’ll need more at next month’s European Championships.

Stolbova/Klimov started off so well, with a very good short program. But then Ksenia fell on 2 jumps in the LP, which really hurt their technical score. Unfortunate, because otherwise I felt that Stolbova/Klimov looked sharper, faster, and more emotionally committed than they have all season. Their non-jump elements were all so well done and very polished. They still took silver, but time is running out in their quest to regain top form in time for the Olympics.

Zabijako/Enbert were wonderful in the short program. I thought they skated better there than they have all season. There was just a higher level of emotion, a little more speed. Unfortunately, Natalia succumbed to pressure a bit in the LP, falling on the SBS 3S and throw 3Lp. Their performance in the long program was probably the worst of the season for them, but what saved them was the high quality level in their other elements. They had no errors aside from the 2 falls, so they were able to hold on for bronze and likely slots at Euros/Olympics/Euros over Astakhova/Rogonov.

What a disappointing event for Astakhova/Rogonov! They finished 4th here again—for the 4th consecutive year!! Try as they might, they just cannot seem to break into the medals at Russian Nationals (and get those post-Natls assignments), and I can’t imagine how frustrated they must be. They actually skated fairly well in St. Petersburg. But they had mistakes in both programs, and in this field, they needed to be clean to have a shot at the podium. Not only did Kristina have 2 side-by-side jump mistakes in the LP, they also lost quality (GOE) points with imperfect throw landings and lack of synchronization in the SBS spins. Those little things added up, and their technical score lagged 5 points behind Zabijako/Enbert’s in the LP (sigh), although their PCS was only a little behind. Astakhova/Rogonov have a lovely mature, strong look in comparison to some of the more junior Russian teams, and much more polished and well-conceived programs. But it just wasn’t enough.

Young team Boikova/Kozlovskii made a huge impression at this competition (on me, anyway). This team is so unusual—they are tall, strong, and athletic, yet also have great charisma and performance quality. Their power and presence on the ice is super-impressive for their age, and they showed the ability to skate up to, and fully interpret, some very big & powerful pieces of music (Nutcracker and Sarabande Suite). Their short program was one of the highlights of the whole competition for me—just so exciting. Their long program started off amazingly—they successfully landed SBS 3Lp, then followed with a very difficult SBS 3T/1Lp/3S combination. Wow! I think this may have been the best side-by-side jumping we’ve seen from any pair all season in a long program. Unfortunately the energy and cleanliness fell off a bit in the second half of the program, with mistakes on the SBS spins, throw 3Lp, and some shaky lifts at the end. Still, Boikova/Kozlovskii mounted a surprisingly credible challenge to the teams in contention for bronze, and I felt they were, if anything, a bit underscored at this event (particularly in the short program). This team’s potential is amazing. One of my only worries is their lifts. With Boikova being rather tall for a pairs girl, they’re going to need to be careful and precise with their lift technique, I think. But I really enjoy watching this team. Boikova in particular has a liveliness and expressiveness that is very fun to see.

Pavliuchenko/Khodykin are still very much a junior team. Small and slight, they simply don’t have the projection and presence of the older pairs. Yet, this couple is undeniably very talented. What I noticed about their skating is the sureness and lightness of it. The choreography and tricks don’t look difficult for them. They feel very confident in everything they’re doing. And they have a nice precision and detail to their skating which actually helped make their presentation of their Chicago LP pretty effective. And right now, their technical elements are very solid.

Mishina/Galiamov are another young and very new team, but they really impressed in the long program. Their basic skating is so strong and sure. They look very in control, very at ease, going into their jump elements, which were all landed very well. Their program was simple, but totally worked. Like Boikova/Kozlovskii, they are a taller/bigger team than some of the other junior pairs, which just makes them look more mature and helps their PCS scores. I look forward to seeing how this team develops over the next year or two.

Junior team Panfilova/Rylov were quite delightful to watch, especially in the long program. Apollinariia is so young and slight, but she has lovely line and delicacy on the ice, and their Alice in Wonderland LP was the perfect choice of theme, as it puts her youthfulness front & center and makes it part of the storyline of the program, rather than something to cover up or distract from. They skate with great speed, and their throw jumps and triple twist were great. Very nice to watch.

Alas, it was a disappointing event for Efimova/Korovin (personal favorites of mine). They held their own in the short program. Their La Strada LP got off to a quite good start, and the level of sophistication and detail in their choreography was much above most of the junior teams. But then their reverse lasso lift in the long program failed completely, not even getting up in the air, for a loss of probably close to 8 points. In such a strong field, there was no way Efimova/Korovin could afford a mistake of that magnitude, and they fell to a disappointing 9th place.

In contrast, junior team Poliuanova/Sopot had their best skate of the season in the long program. Up to now, I haven’t really seen great potential with this team, but they changed my mind a bit in this LP. They landed all their jumps well and showed a good quality level in their other elements; it was nice to see them put it together here. I do feel this team has quite a bit to work on in the off-season, though. Poliuanova needs more excitement and energy in her performance level; and Sopot needs more finesse and better lift footwork. Still, it was a great event for them, and considering this is just their first year together, they’re doing well.

I was also quite interested to watch Poliuanova’s former partner Maksim Selkin in his new partnership with Tatiana Lyirova. Lyirova/Selkin made some errors in their programs, but they seem well-matched and appeared to have excellent speed. Their throw jumps had so much speed coming out that it was a challenge for Lyirova to control them. I was also really impressed with Selkin’s footwork in lifts, which was exceptionally smooth and easy. I hope this team stays together and continues to develop.

Senior team Lukashevich/Stepanov took last place. This team seems to have decent speed and skating skills, but are much more mistake-prone than the other Russian teams.

I have to say again that the overall quality of the Russian pairs is just so impressive. Only one team in this event scored below 100 points in the long program. Every other team scored 108 points or higher—excellent. The depth and quality of the field here was exciting, and the competition a privilege to watch. An early Christmas present! 🙂

Note: If you’re enjoying the articles on The Divine Sport, please take a moment to “like” the site’s Facebook page: https://www.facebook.com/adivinesport/. You can also follow me on Twitter to get updates of new posts: @ClaireCloutier.

One thought on “Notes from Russian Nationals 2017”