So, the skating season wrapped up this weekend with the World Team Trophy event in Japan. Although the pairs field in this event was small—only 6 pairs competed—it was still an interesting competition, with several surprises. The ISU did not tally official final results for the individual divisions in this competition. However, the unofficial winner of the pairs event was Sui/Han. Their unofficial total combined score topped Duhamel/Radford by a margin of 1.55 points. 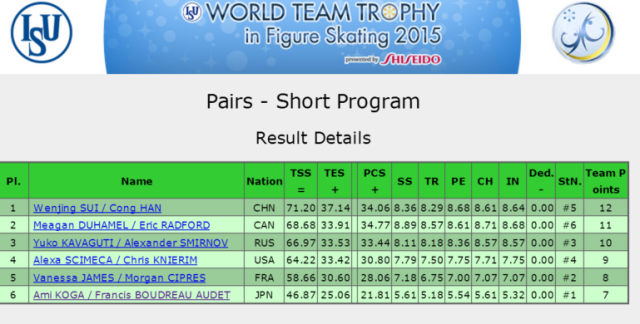 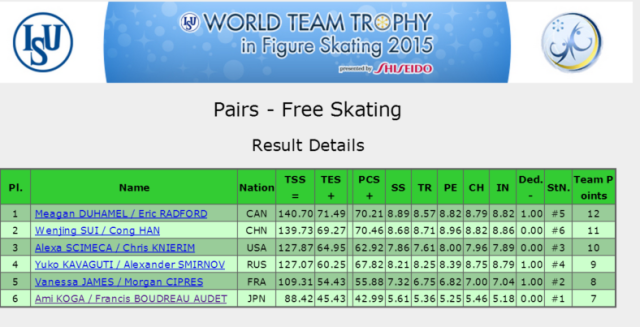 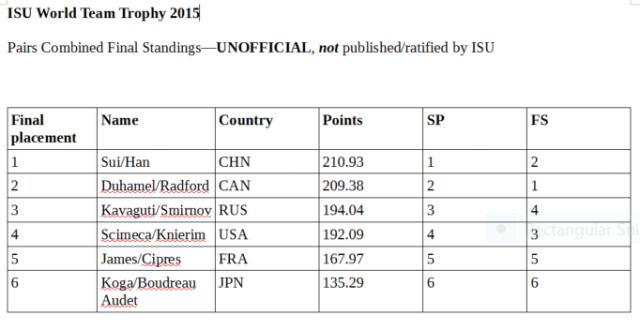 In the short program, Sui/Han took the ice as World medalists for the first time. A big milestone for them! They looked relaxed and at ease during their Stray Cat Strut SP. This program is fun and sassy, and it was nice to see them put out a good final performance of it. It didn’t have quite the same energy as their incredible SP in Shanghai, but it was very well delivered. They hit all their elements well, especially the throw 3F, which earned many +3s from the judges. They took 1st place.

Sui/Han followed with a strong, emotional performance of their Francesca da Rimini LP. They opened with a beautiful quad twist, followed by a solid set of SBS 3T/2T/2Ts. Their throw jumps were both amazing, and the only error came on the SBS 3S, which Wenjing doubled. Sui/Han also excelled in their lifts. Cong maintains great ice coverage and speed, and their transitions between lift positions are quite smooth. It all adds up to lifts that are both consistently high-scoring and crowd-pleasing as well. Their program is packed with interesting, often lovely, transitional moves, and Wenjing/Cong performed it with a lot of intensity. They earned 139.73 points to finish 2nd in the long program, less than a point behind Duhamel/Radford.

Following their silver medal at Worlds, Sui/Han got a nice PCS boost here at WTT. In both programs, their PCS was roughly a couple points higher than Worlds, and they actually beat Duhamel/Radford in PCS in the LP. Just as important, their GOE is through the roof. They earned 14+ points over base value in the LP alone. Their score sheet is a sea of +2s/+3s. Basically, the judges love the quality of their elements.

With their success at Worlds and WTT, Sui/Han are in position for a big season next year.

Talk about bad luck—Eric Radford came down with a severe case of food poisoning after arriving in Japan and wound up in the hospital. It was in doubt whether he and Meagan could even compete.

Eric did manage to recover in time for the short program, and Duhamel/Radford skated very well overall in this segment. As usual, they earned level 4s on every element except the twist. However, unfortunately Meagan doubled the SBS 3Lz, and this mistake dropped them behind Sui/Han.

The opening minute of Meagan/Eric’s Muse LP was rocky. The SBS 3Lz was landed but with a hand down from Meagan. Then she fell on the throw quad Salchow. However, after that mistake, D/R gathered themselves and skated the rest of the program like the world champions they now are! Their remaining elements were all well done and received good GOE. And they finished the program strongly. Their PCS was just a couple-tenths lower than Sui/Han’s, but once again their high technical base value carried them, and D/R placed 1st in the long program.

Considering the food-poisoning ordeal, I think Meagan/Eric did well here. However, this competition showed that they’ll have to stay on their toes next season versus Sui/Han and other rivals.

Coming into this event after a disappointing Worlds, I’m sure Yuko/Sasha were hoping for some redemption here. Unfortunately, it didn’t quite happen.

Yuko/Sasha’s Mediation from Thais SP was as beautiful as ever. I love the freedom, flow, and lightness they have in this program. I thought Sasha, in particular, looked very relaxed. Their elements were all completed very well except, unfortunately, the SBS 3T. Yuko had an awkward stumble on the landing, which detracted a bit from the impression of the program. They placed 3rd. I have to say, though, I’ve felt all season long that their PCS should be higher for this lovely program.

Unfortunately, Yuko/Sasha had a few problems in their Manfred Symphony LP. Yuko fell on the opening SBS 3T. The SBS 2A/2A sequence was good, and Yuko landed the throw quad Salchow (albeit a bit forward). However, their Axel lasso lift was slightly shaky. And although Yuko landed the throw 3Lp, she did not have full control/extension of her free leg, so that element got hit with a lot of negative GOE. It wasn’t a terrible performance, but it was well off their season’s best. They fell to 4th place in the LP.

I think Kavaguti/Smirnov didn’t achieve quite the results were hoping for this year. However, they did win the European Championships. And their gorgeous programs this season gave fans a great deal of pleasure and will be remembered for a long time to come.

Alexa/Chris had a strong competition at WTT to help the U.S. team win the gold medal.

I thought their Tango de Roxanne SP was one of their best short programs of the season, as a total package. Their triple twist was spectacular and earned many +3s from the judges. Chris did put a hand down on the SBS 3S, and Alexa’s free leg was low on the landing of the throw 3F. However, these mistakes didn’t cost too much, and their other elements were good. I thought Alexa/Chris’s unison, polish, and crispness looked improved. Overall it was a good skate, and they placed 4th in the short program.

Unfortunately, I haven’t yet been able to see Scimeca/Knierim’s LP! (Very frustrating.) The feed for the event stopped working prior to their LP, and no videos have yet emerged. 😦

Their LP protocol indicates, however, that they had a good performance in the LP. They landed the quad twist, earning 9.67 points. SBS 3S were apparently good, as was throw 3F. It looks like there was possibly a hand down or other slight problem on the SBS 2A/2A sequence (-1 GOE marks) and perhaps a foot down or stepout of throw 3Lp (-2 marks). All other elements appear to have been good with positive GOE. The PCS was their highest of the season. Their total score was 127.87, a new season’s best, and they unexpectedly pulled up to 3rd over Kavaguti/Smirnov in the LP.

Based on the LP numbers and their SP, though, I think you have to look at WTT as a big success for Alexa/Chris. They helped the U.S. team win the gold medal. They set a new personal-best score, as well as season’s-best overall and LP scores. Their total PCS was up 2+ points from their previous best. And, for the first time, they beat a top-tier competitor in one of the programs here. It all speaks to their continued progress.

Prior to this event, Scimeca/Knierim told TeamUSA.org that they will get a new long program for next season but will keep their Tango de Roxanne SP. At first, I was disappointed by this news. I really prefer to see skaters get 2 new programs every year–I feel it’s an important part of moving forward artistically. (Also frankly, as a fan, it’s nice to hear new music and see new routines!) However, after seeing S/K here at WTT, I’m feeling a little better about it. The truth is, it took Alexa/Chris a while to get fully comfortable with this SP. Their first few outings were quite tentative, but now they’re really starting to look in command of the program. Meanwhile, Alexa said in her recent WiSP podcast that they intend to spend a lot of time polishing and refining their movement this offseason in order to improve their unison and presentation. I am guessing that they feel they can focus more on detail work if they’re not learning 2 new programs at the same time. So maybe it will all work out for the best.

Vanessa/Morgan also skated their SP to Tango de Roxanne. They had an okay performance. Vanessa stumbled out of the SBS 3T. The footwork sequence was also kind of leaden and heavy-footed and dragged the program down a bit. They placed 5th.

James/Cipres had their strongest LP of the season at Worlds, so I was hoping they would do well in this segment at WTT. Alas, their LP wasn’t great. They went for a 3T/3T sequence as their first jumping pass. This surprised me, as they’ve been doing 3T/2T/2T all season. Not sure why they changed (the two elements are roughly the same value), but in any case, Morgan put a hand down on the second 3T. Vanessa then landed awkwardly on the SBS 3S and later fell on the throw 3F. There was also a problem on the throw 3Lp. They scored 109.31, almost 10 points off their Worlds LP, to place a distant 5th. Worryingly, their total GOE for this event was slightly negative—meaning that overall, they did not even receive credit for all the base value they attempted. That is not where they want to be.

Not sure what the offseason will hold for this pair.

This was the first senior event for Ami Koga/Francis Boudreau Audet. Earlier this spring, they competed at Junior Worlds and placed 6th. They’ve been together for 2 years now.

Ami/Francis skated to Madame Butterfly in the short program. I loved their costumes and found the program quite appealing. They had some technical errors, but their lines/unison are good for such a young team, and I thought Francis in particular had a nice feeling for the music. They placed 6th.

Their long program is set to Spellbound Concerto by Rozsa. It’s an interesting program with some lovely transitions. However, their inexperience definitely showed in this segment. They were noticeably slow going into several elements, and again had a few technical errors. Ami singled the SBS 3T and two-footed the throw 3S. Ami’s lift positions are nice; however, the rotational speed of the lifts needs improvement. Also, they only did a double twist.

I like this young team, and they have a nice look. However, they need more speed and power in their skating to be competitive at the senior level.

This was a fun event to officially end the season! I’m sure many of the skaters will be going on much-needed vacations now. Best wishes to all of them over the offseason!