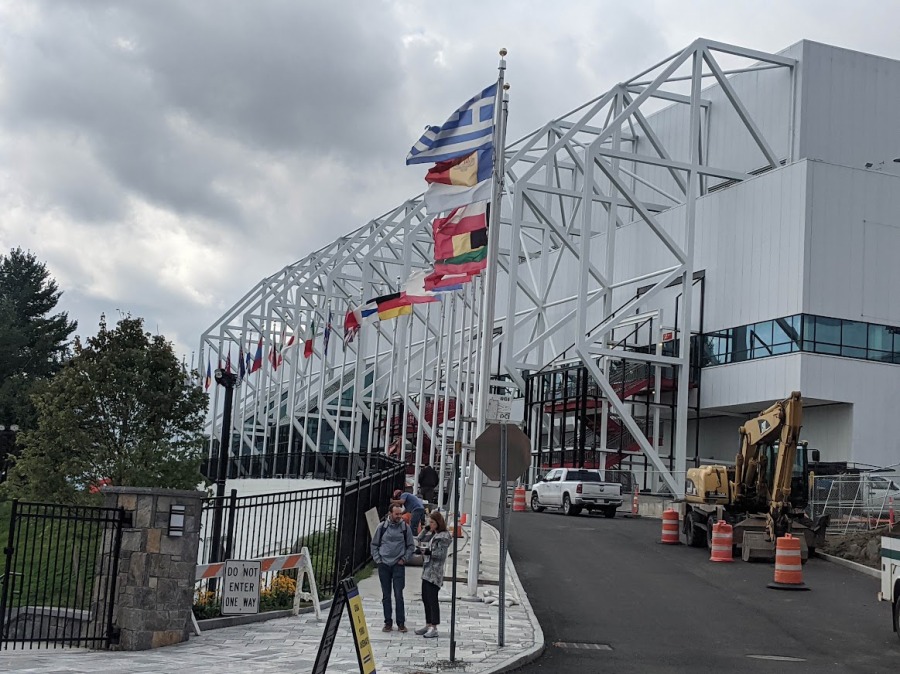 A couple weeks ago, I had a chance to go to Lake Placid, NY, to cover the 2022 U.S. International Figure Skating Classic. The competition turned out to be pretty exciting, with Ilia Malinin making skating history by landing the first quad Axel.

It was my first time visiting Lake Placid–a small town that has played an outsized role in the history of U.S. winter sports. Lake Placid hosted both the 1932 and 1980 Winter Olympics, and will host the 2023 Winter Universiade event next year. It is also a center for events and training in other winter sports. I didn’t really know what to expect from the town, but I had a feeling it would be pretty cool, one way or the other. And it was.

Lake Placid lies in the Adirondack mountains, at 1800 feet above sea level. Although it’s not, of course, as high up as the Rocky Mountains out west, I did feel the altitude a bit while walking around town. You can see hills all around in the distance, and the village sits directly on the shoreline of small but lovely Mirror Lake. The whole area is super-scenic and a really nice place to visit for a skating competition.

It’s pretty cool being near a lot of sports history, too. Directly on the other side of the street from the arena is the speed skating oval where Eric Heiden won five gold medals in the 1980 Winter Olympics. And U.S. Classic itself took place in the same rink where the “Miracle on Ice” happened and the U.S. hockey team won Olympic gold in 1980. Not too many skating arenas can boast that kind of history!

The skating itself was pretty great. U.S. Classic is an early-season event, so you know going in that skaters aren’t going to be in the same kind of top condition as at Nationals or Worlds. However, the upside of the early-season timeframe is that you get to see a lot of new-program debuts and, sometimes, witness skaters trying out new things that they’d be hesitant to go for in a larger competition. I’ve attended this event three times now, and it always winds up being quite fun.

Here’s some news & notes from the unofficial mixed zone about each discipline.

END_OF_DOCUMENT_TOKEN_TO_BE_REPLACED

This past week brought a new milestone in men’s figure skating. U.S. skater Ilia Malinin, 17, became the first man to ever land a quadruple Axel jump in competition, a feat he accomplished at the U.S. International Figure Skating Classic in Lake Placid, NY.

Malinin’s groundbreaking moment caught the mainstream press by surprise. Those who follow figure skating closely, though, were primed for the moment. This spring, Malinin had shared videos of himself doing quad Axels in practice, so skating fans knew it was a possibility he’d land the jump at this competition.

Still, the actual sight of the first quad Axel was stunning. This is in part because the triple Axel jump–the quad’s predecessor– remains itself such a relatively significant element in men’s skating.